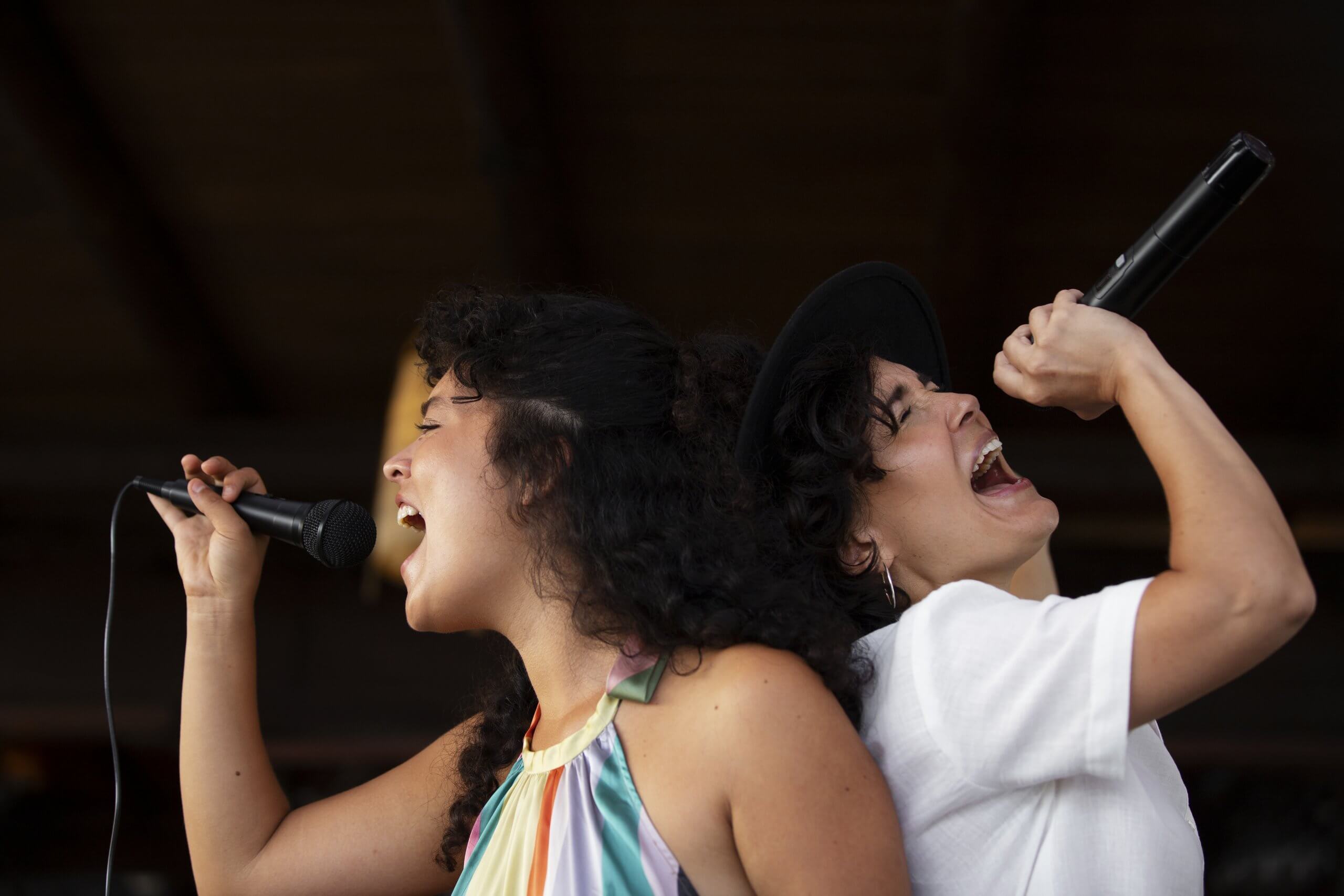 Have you ever listened to the radio, and although you weren’t familiar with the song, you immediately recognized the artist’s voice? That is because the human voice is something that is unique to an individual. It is an instrument in and of itself! There are many variables that determine the sound someone produces with the voice. Musicians call the characteristics of someone’s voice their “timbre.”

For instance, the size and shape of a singer’s vocal cords and mouth is determined by genetics. This greatly affects timbre. Other lifestyle factors and special training can also affect the tone and can result in each person having a different sounding voice. Because of these variables, there are unique tones to each person’s voice. However, there are six main groups that a voice type can fall into.

What are the different types of singing voices?

Singing voices are categorized into six main groups: sopranos, mezzo-sopranos, altos, tenors, baritones, and basses. Of these, sopranos are the highest sounding voices, while basses are the lowest. The rest fall between these two groups.

Sopranos sing in the highest register. In a piece of music, their melodic line is usually at the top of the staff in the treble clef. A soprano’s timbre sounds bright and high. The range of a soprano can vary, but these singers can usually sing from a middle C all the way to a high A (C4-A5). Sopranos are usually females, but this is not always the case, as there are some males who have trained their voices to sing in these high octaves, such as Robert Crowe. One famous song written for sopranos is My Heart Will Go On, performed by Celine Dion. You can find another list of famous pop songs for sopranos here.

Mezzo-soprano: a medium voice between soprano and contralto

A mezzo-soprano has the second highest voice. “Mezzo” means “middle” or “half” in Italian. They are called this because they mostly sing in the middle of their vocal range. The mezzo can sing the G below a middle C all the way to a high A (G3-A5), but their richness of tone sets them apart from a soprano. While sopranos have a brighter timbre, mezzo-sopranos are said to have a darker and richer color to their voice tones. Because of this unique sound, mezzo-sopranos are often assigned the roles of wise, nurturing women in an opera. In modern music, the recording artist Adele serves as an example of a mezzo-soprano.

An alto is the lowest female voice type. The alto part is also found in the treble clef below the soprano part. Like the mezzo-soprano, the alto has a rich, dark tone. The range in which the alto shines is the F below middle C all the way up to a high D (F3-D5). The word “alto” means, “high,” as it originally referred to the highest male voice. That male would sing falsetto.

Now, alto commonly refers to female voices. While the alto may have a lower range, they get plenty of perks in the music world. For instance, in modern music as well as worship music, most songs are suited for the alto or mezzo-soprano voice. The recording artist Lauren Daigle performs many popular worship songs in her alto range. Also, if not singing the lead, the alto usually gets to sing a beautiful harmony in a song instead of just remaining in unison.

The tenor is the highest male voice. This is the highest voice in the bass clef of the music staff. The range of a tenor can span from the B below middle C to the G above (B2-G5). Sometimes a tenor with a very high range is called a countertenor. The countertenor range is similar to that of a mezzo-soprano. In modern worship music, it is a great thing to be a tenor. Most worship songs are in a tenor or baritone range. Chris Brown from Elevation Worship is a famous tenor in worship music. In pop music, a great example of a tenor is Ed Sheeran.  Male singers who can sing high notes are widely celebrated in modern music. If you are a male singer who is interested in extending your range, you can look into our vocal performance program here.

Baritone: a medium voice between tenor and bass

A baritone is a male voice that has a range between a tenor and a bass. In a choir, the baritone would typically sing either the tenor part or the bass part, which are both notated in the bass clef. The range of the baritone falls between A2 to F4 on the scale and the tone of the baritone is often described as “rich” and full of character. It is actually the most common male voice! A few famous baritones in today’s pop music world are Michael Bublé and John Legend.

The bass voice is the lowest of the voices. The bass part of a piece of vocal music is notated on the bass clef. A true bass voice is rare! The qualities of the timbre of a bass are very dark and rich. This is caused by the singer’s thick vocal chords. Their range can go as low as second E below middle C (E2). In today’s music bass singers are rare, especially since most songs are not written for a bass to shine. Some famous bass artists are Josh Turner and the legendary Johnny Cash.

Now you have a better understanding of the six voice types. When you hear that particular singer on the radio, you can determine what type of voice they have! This can help you as you figure out the intricacies of your own voice and what songs and vocal parts will be best for you.

Get started with Visible

No matter what your unique voice tone sounds like, you can always grow your abilities and giftings. Are you interested in becoming a better singer? At Visible, we have programs that will invest in your God-given talents and prepare you to use them for His glory! We can elevate your musical skill and teach you about the fundamentals of music and music theory along the way through our Bachelor’s of Arts in Modern Music Vocal Performance. You can also pursue training through our Certificate of Modern Music in Vocal Performance. Wherever you are in your musical journey, Visible has a next step for you.