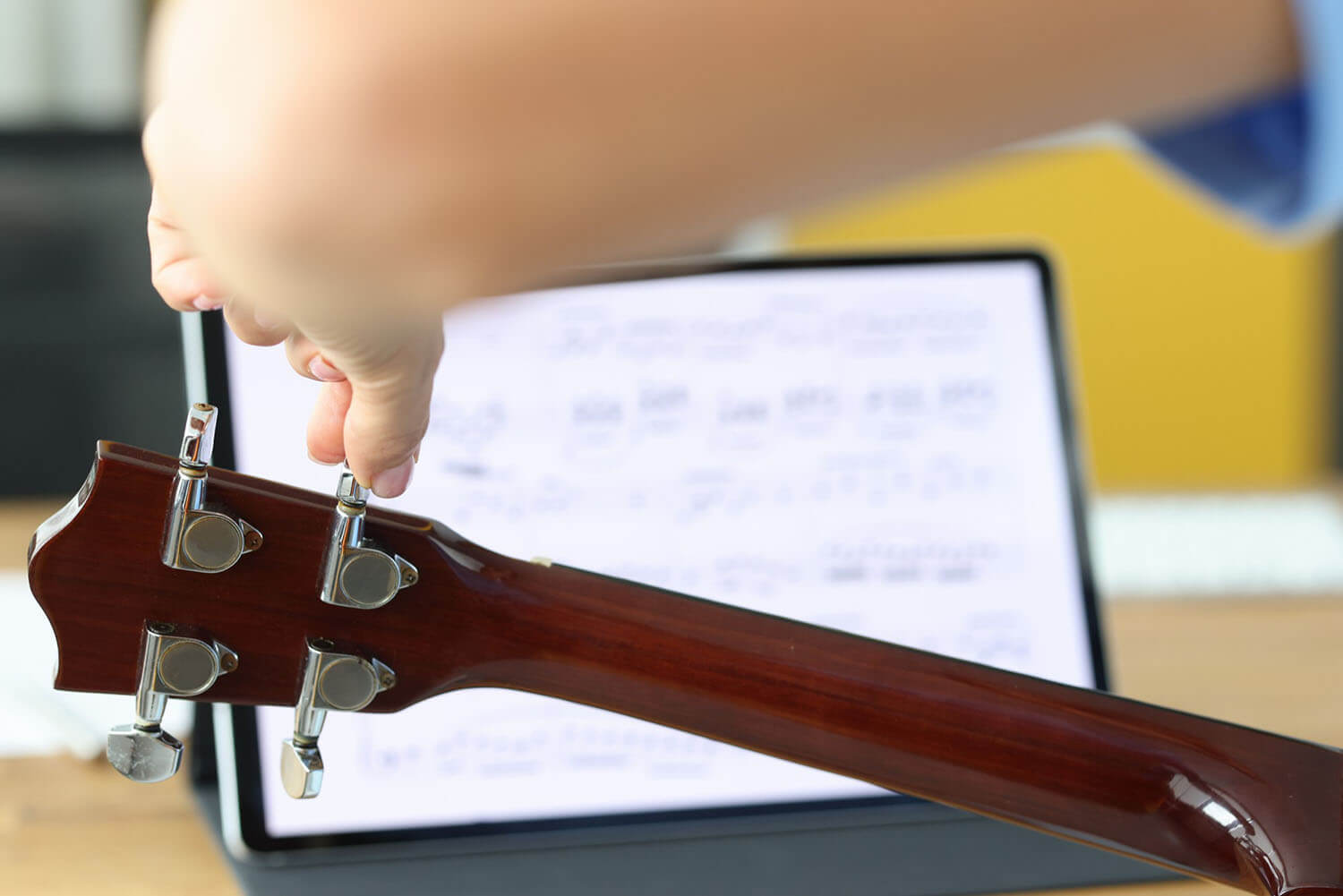 The best analogy for how long it takes to learn music theory is to equate it to math.

You must know addition, subtraction, multiplication, and division – it does take a few years to learn it.

Music theory is not something you can learn in a few weeks, but you can get the basics down fairly quickly.

What Is Music Theory?

Music theory is simply the way that we can describe the sounds we are hearing – that’s it!

It is important to understand that the music came first and then we said “Oh! That sounds good!” and we needed to come up with a way to describe the sounds. Kind of like language. We know that speech came first before we wrote it down.

Why Music Theory Is Essential

Music theory isn’t that difficult. However, people who struggle with theory the most might be holding on to the idea that they should be able to play music without having to learn it.

Some people are simply against theory and have this view that they were just born with it.

Learning music theory is a wonderful thing and helps you to play even better. Musicians constantly think about music theory in everything they play because it allows them to learn songs faster, retain musical information and it makes everything logical.

It’s A Part Of Musical Language

You wouldn’t want to be a professional writer without learning any grammar, would you?

It’s essential to learn music theory. Think about everything in life where you know you have to learn the rules. You wouldn’t want to be a professional writer without learning any grammar, would you? In the Rock n Roll era, around the 1950s, we were idolizing musicians that claim they were just born with talent without any training and it’s not very true.

Most musicians know music theory and you can kind of see it in the way they put together their songs especially if they’re professionals like instrumentalists or technicians. Take the band Green Day – their music isn’t all that technically complicated, but they do know enough theory to know what chords and scales work together to produce songs.

The Goal of Music Theory – Hard But Is It Worth Learning?

There are different levels of music theory depending on your goals as a musician.

Be Balanced In Every Genre and Style

You may not think learning jazz will make you a better worship musician, but with music theory you will lightly utilize many tactics in all genres.

Every musician who learns music theory will find it easier to play the music that they want to play – even with at least a small grasp.

For instance, with basic diatonic harmony (which any hobbyist would need to know), you can get a grasp on music theory in less than a year. However, it will take a while longer than that if you want to be a professional,

Korey Hicks started learning music theory at age 16 and was fairly competent in it by the age of 24 to the point where he could play almost anything he wanted to play.

Yes, you have three to four years in school, but then after you graduate is when you actually solidify what you’ve learned and allow you to use it with real-world examples.

Learning Music Theory On Your Own

It is practical to try to learn music theory through personal practice and watching Youtube, but it also depends on what type of learner you are.

Reading books will require a lot of patience so it is still suggested to use an instructor.

With Youtube, you will always be dealing with instructors with their personal bias and agendas to learn music much quicker but you really have to understand who you’re learning from.

If the person you’re learning from on Youtube is not versatile and is only teaching one style of music, that could be a red flag and may not be experienced in a variety of other things.

It is very necessary to have an instructor or teacher to teach you music theory unless you’re a really great self-starter, someone who can focus, and can set goals for yourself.

The signs of good instructors are people who are students themselves, who practice and study music all the time. Be wary of people that seem to know it all and also people who are dedicated to one genre of music and people who make statements like “Oh you don’t need to learn…”.

Those who do that usually have a weak spot in those areas and they’re human so they’ll make up for their own faults.

Because this material is so absolutely essential, attendance is mandatory. Even missing one session could create confusion or a gap in knowledge that will cause the student’s music theory grades to suffer throughout their college career.

Music Theory from a Vocalist’s Perspective

“As a vocalist, I never understood the importance of knowing music theory, but that all changed when I joined choir in High School.”

“I had a rude awakening when we began singing songs I was familiar with. It never occured to me that the artist performing specific songs were adding their own personal touches.”

“I realized that many times we sing songs how we hear them and not how they are written. Reading and analyzing a piece of music before actually singing it is vital in learning it correctly.”

“I also discovered that having music theory knowledge as a vocalist helped me to lead my bands better. For the longest time, I struggled to communicate with my team members. I had trouble when they looked to me to know what progressions to play in instrumentals. I had no clue how long they needed to hold each chord, nevertheless what chords. I was even worse when it came to communicating with my drummers.”

“Gaining more music theory knowledge besides sight reading completely changed the way I lead my team. As a vocalist it is imperative to have a broad understanding of music theory.”

Music Theory from a Guitarist’s Perspective

“It’s no different from any other instrument. You don’t learn theory on the guitar, you learn theory and apply it to the guitar. As a good starting point, knowing where all the notes are on the neck is really important.”

Music Theory from a Keyboardist’s Perspective

“For any musician, an understanding of music theory is the most important pathway that leads to musical literacy.”

“The musician’s journey of deepening their theory knowledge supplies them with an expanding musical toolset that can be applied to their instrument.”

“As a keyboardist, the keyboard is the instrument that most influences my toolset and musical perspective. Music theory is central to my craft, giving me the capability to read and write down the musical language, and allowing me to grow as a musical artist.”

“When I deepen my understanding in theory, I strengthen the spine of my musicianship.”

Music theory is more than just a series of chords and scales.

It’s about understanding how music works so you can create your own compositions, improvise on the spot, or play with others without being overwhelmed by the process.

Whether you’re learning on your own or in a group setting, it doesn’t matter what instrument you want to learn-music theory will be an invaluable resource for all musicians across any genre!

If this sounds like something that would interest you but isn’t sure where to start, reach out!

Learn More about how you can earn your degree in the field of Modern Music with a Music Theory as part of your coursework at Visible Music College.